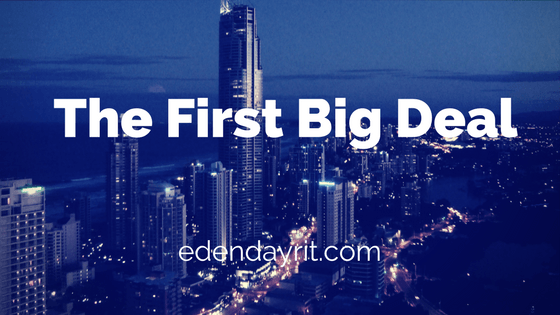 I had a formula that worked.

It worked so well such that it became boring.

“Why fix, when it works?” was my philosophy.

But I knew that something’s amiss.

Then, I met a fellow investor. He had an office (I didn’t that time). He had staff (I was a one-woman army). And he had simultaneous working projects.

“How did you do that?” I inquired.

“I have a lot of mouths to feed. My employees rely on me getting new projects. They have children. I took it upon myself to grow this business, so I can give my employees their needs.”

I was amazed. All this time I was resting on my laurels because I only needed to support myself. It was a selfish thing to do when you are capable of doing so much more. I didn’t realize until then that I’ve become complacent. Something has to change. “I saw a 10-door townhouse complex bank foreclosed listing near the mall, I cannot do this alone,” he said. It was an invitation to partner on this deal – a big one (then). It was a no-brainer. The acquisition cost was way below the market value. He has a company (I didn’t back then) with a good line of credit we can leverage on. I’ve become proficient in doing the numbers and getting investors. I didn’t hesitate and said yes.

It was hard. I learned a lot about corporate paperwork. I learned that you are invisible to the banks if you didn’t properly set up your company in the beginning. There’s no room for carelessness. (Side story: I experienced my very first bounced check doing this deal. I knew I had sufficient funds to cover the check. But I forgot that a portion was placed in another account. It was painful in the pocket, lesson learned.) My old ways of “just cruising by” won’t cut it. The bar was set high and I had no recourse but to quickly catch up.

We did our tasks and sold everything within 2 years. I came out with a new perspective on doing business and gained a friend.

Once Upon a Quaint Village Eden Dayrit is a licensed real estate broker, appraiser and an accredited lecturer based in the Philippines. You may reach Eden at edenapril@gmail.com.